What is Memorial Day?

Memorial Day was a holiday in memory of soldiers who died in the civil war. All non essential government offices are closed as are schools, businesses and other organization. The original name (Decoration Day) comes from placing flowers on the grave of soldiers. The Memorial Day is celebrated to say thanks military persons for the sacrifices you have made for our freedom.

When is Memorial Day? 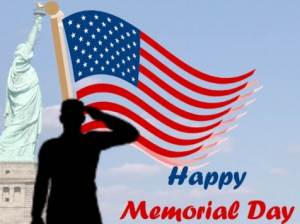 Celebrations honoring civil war heroes started the year after the war ended. So that day it is very common to visit cemeteries particularly military cemeteries at this time of year decorate the grave. Many TV shows and radio shows are made about Memorial Day.

By the late 19th century the holiday became known as Memorial Day and was expanded to include the deceased veterans of all the wars fought by American forces. In 1968 the uniform holiday’s bill was passed then in 1971 Memorial Day became a federal holiday.

These fallen heroes represent the character of a nation who has a long history of patriotism and honor and a nation who has fought many battles to keep our country free from threats of terror.

“A hero is someone who has given his or her life to something bigger than oneself.”

“Patriotism is supporting your country all the time and your government when it deserved it.”

We will never forget soldier’s sacrifices. We learn that day how to live for others and our country. So that day is very passionate.

Patriotism consists not in waving the flag but in striving that our country shall be righteous as well as strong.

Conclusion: Memorial Day is commemorates of all American soldiers who have died in military service. They have earned undying gratitude America will never forget their sacrifices.